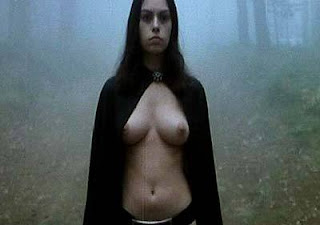 Posted by The Headless Werewolf at 7:53 AM 2 comments:

Not only does The Last Werewolf look to become a major text in horror literature (and perhaps the "great" novel that has eluded werewolf literature), but it also marks an interesting collaboration between written literature and music. Glen Duncan writes--and reads--with blood-drenched elegance, as the video below demonstrates.

The Last Werewolf Is Our New Favorite Book

Not a lot of time for updates anymore here in the tomb, but one thing's for sure: we still love our werewolves, even when they come with heads. A recent must-read on the book stands comes in the form of Glen Duncan's The Last Werewolf, and by all means, read a copy as soon as possible. In the meantime, The Real Tuesday Weld has put together a marvelous soundtrack for the book, including what you find in the dandy video above.
Posted by The Headless Werewolf at 7:49 AM No comments: 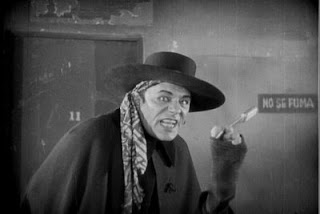 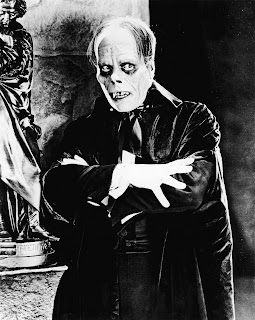 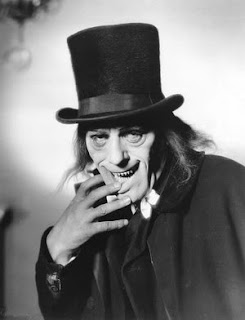 In the midst of all the April 1st tomfoolery, the birthday of Lon Chaney should not go unnoticed. Born on April 1st, 1883, Lon Chaney entered the nascent cinema industry and created horrific make-up designs and monstrous imagery that still resonate today.
Posted by The Headless Werewolf at 2:59 PM No comments:

Give It Up for the Queen of the Pulps 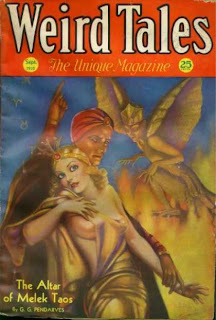 Pictured above, Margaret Brundage's first cover for Weird Tales, the original of which sold for over $50,000 at a 2008 auction. The most recent issue of the newest incarnation of Weird Tales ran an overview of her work in its pages by Paula Guran and included some interesting, even sad morsels of information. Despite the fact that an original painting would go for such a high figure in 2008, Brundage spent the the years leading up to her death in 1976 living in near-poverty and even had some of her work stolen at science fiction conventions. Guran cites John Clute and Peter Nicholls as describing Brundage as "the first woman artist to work in the sf/fantasy field, and the first of their sex whose covers featured nudes." 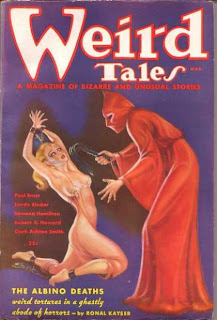 Following "The Alter of Melek Taos," her work became even more . . . well, interesting, as Brundage continued to explore subversive expressions of sexuality, with suggestions of bondage and s & m that apparently divided the magazine's readership. In Guran's article appears a quotation by Robert Weinberg: "When readers complained about nudity on the cover, [editor] Farnsworth Wright had Brundage do cover without nudes. Complaints flowed into the magazine office, and within a month, the nudes were back." We tomb dwellers situate ourselves firmly in the latter camp. 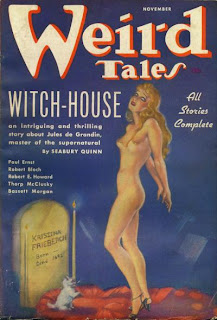 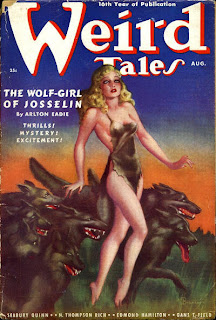 Posted by The Headless Werewolf at 9:37 PM 6 comments:

Dracula is bigger than Jesus. 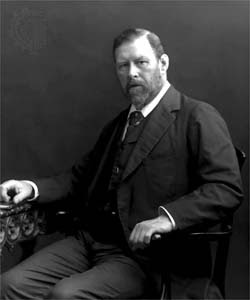 Hey, It's Bram Stoker's birthday. I implore you to take some time out of your day and reflect on the man who gave us the greatest literary and pop-culture icon of all time.

The Tomb’s Favorites of the Decade: The Forgotten, the Rejected, the Ignored 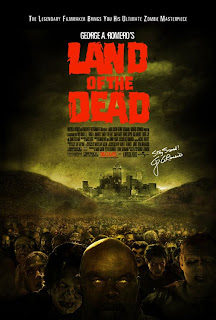 I’m a junkie for lists of favorites, but I often find it a hopeless task to compile my own, especially when I have to choose selections from a decade which—despite all our bitchin’ and moanin’ about remakes and sequels—was actually quite a good one in the horror genre. To hopefully avoid duplicating the many fine lists running through the blogosphere (sheesh, who wants consensus?), I plan to focus on a) films that may have run under the radar, b) may have had only a fleeting moment of attention, or c) may be hated and loathed by just about everyone else.

La Fiancée de Dracula (2002): While the French stole the latter part of the decade with excellent films like INSIDE and MARTYRS, my heart goes to Jean Rollin’s return to vampire themes. Less concerned with plot and more concerned with the creation of a pastiche of images, Rollin continues to deconstruct our preconceptions of what constitutes a vampire movie. Here, the images are lush, disturbing, and strangely romantic without a single glittering vampire in sight.

Rojo Sangre (2004): Christian Molina’s film brings us not only Paul Naschy’s finest performance, but it’s a self-reflexive horror film that avoids the problems that often mar other films of its kind, namely a sense of superiority over its material. Naschy’s performance as a washed-up actor is marvelous, and his final descent into madness is appropriately disturbing.

The Host (2006): Korea’s excellent take on kaiju tropes came before CLOVERFIELD and offers more emotional intensity, as well as a more frightening creature. In addition to causing the usual city mayhem, this creature maintains a lair for its human “food” that is the stuff of nightmares.

Teeth (2007): Michael Lichtenstein brings us a sharp satire that does not skimp on the horror, as a promoter of teenage abstinence comes to her own unique sexual awakening when her vagina dentata put the bite on those who test her “purity.”

Land of the Dead (2005): While I enjoyed Zach Snyder’s remake of DAWN OF THE DEAD, what I love most about it is that it gave Universal Studios the stones to allow George Romero to make the fourth installment of his “Dead” series. Mainstream critics, and fans seemed to applaud it—at first. Then the naysayers piped in, and now the common wisdom seems to be that it “divides” the fans. Me, I loved it when it came out, and still love it. I hope that time is good to this one the same way that time was good to DAY OF THE DEAD.

I Know Who Killed Me (2007): I’m serious. I know that this may destroy whatever meager credibility that I may have had in the first place, but I did promise to include the “rejected” on this list, no? So, yes, I’m including Chris Sivertson’s derided homage to the Italian giallo, which I find charming for its loony plot twists and gloriously blue gel lighting, despite the baggage it brings with the casting of Lindsay Lohan. I saw this all by myself in a big theater auditiorium, and I’m sure I’m still all alone in my assessment of this one.

Wild Country (2005): I have no trouble admitting that DOG SOLDIERS and GINGER SNAPS are better werewolf films, but hardly anyone is talking about this very modest Scottish production. While its creature effects wind up diminishing the film’s overall effect, director Craig Strachan scores big with atmosphere and setting. Love the moor scene in AN AMERICAN WEREWOLF IN LONDON? Then this is one to savor for its moody use of forests and castle ruins.

All the Boys Love Mandy Lane (2008): And I have no problem admitting that I love her as well. This past decade showed us that the cadaverous body of the slasher film will rise, and rise, and continue to rise. Jonathan Levine’s film manages to give us a sliver of freshness, however, especially with an ending that I honestly didn’t see coming.

Roman (2006): In 2003, the wonderful MAY put Lucky McKee on the map, along with his amazing leading lady, Angela Bettis. In this follow-up, the two switch roles, with Bettis directing, and McKee showing that he has excellent acting chops of his own. Once again, we have a horror movie that focuses on the outcast and the lengths that one will go to in order to find acceptance and love. This film makes a wonderful double-bill with MAY.

The Black Cat (2007): Stuart Gordon’s second installment in the “Masters of Horror” series brings us one of the finest adaptations of Edgar Allan Poe’s short stories, cleverly casting Jeffrey Combs as Poe himself. Readers frequently confuse Poe’s mad narrators with Poe the writer, but this film turns confusion into a brilliant conceit, calling upon us to consider madness as an essential component in the process of creating dark art. Strangely, this film provides us with a rarity in the world of Poe: a happy ending. Combs continues to play the part of Poe in the stage production of NEVERMORE, which I, sadly, have not yet seen.
Posted by The Headless Werewolf at 8:06 AM 8 comments: